we were drawn to this house from the start.  in fact, we weren’t even looking to move the day that we found it.  it was for sale by owner, so we called, took a look that day, and made an offer the next.  about six weeks later, we were living there.  i still can’t believe that we only looked at one house – sheesh.  we have never regretted it, and i guess it just felt like it was for us the moment we stepped inside.

it’s a cape code, and we love that it has an older feel, but it’s only 25 years old.  the exterior has gone through a few different looks in the last 5 years.  here it is not long after we moved in.

when we moved in, the front door and shutters were hunter green – not my favorite.  shortly thereafter, we did a quick fix, and painted the shutters black, and the front door red.  we were happy with this look for a long time, but after a few years, it was evident that we needed to paint the entire house, and make a few repairs.  we were ready to make a big change, and wanted to go darker, so there would be more of a contrast between the body and trim colors.

just last week, the project of painting the exterior of our home came to completion.  hooray!  you might also notice that the landscaping is a little lighter – i cut down the random shrub to the left of the steps, and the ‘christmas tree’ that was on the far right of the house.  they were getting a little out of control, and i am so happy they’re gone.   all combined, it was a huge facelift, and we are so happy with the results.  it kind of feels like we’re driving up to a new house. 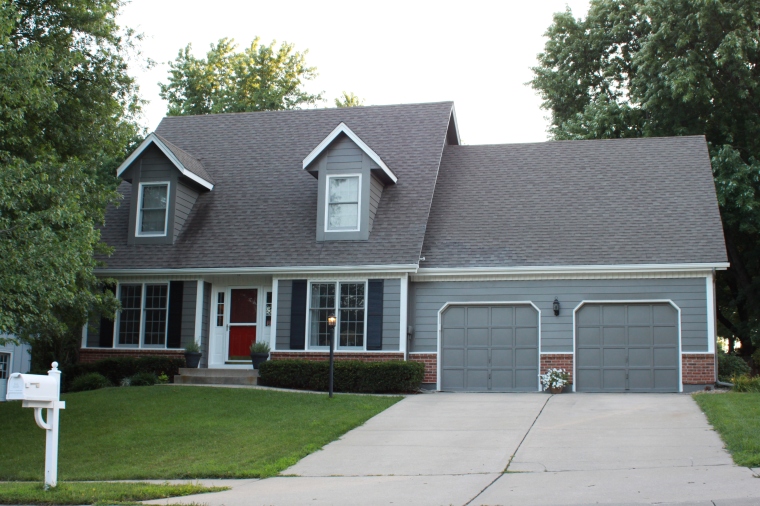 we had a great painter, so if you need a recommendation, shoot me an e-mail – carabrooner(at)gmail(dot)com.

4 thoughts on “house exterior – before and after”